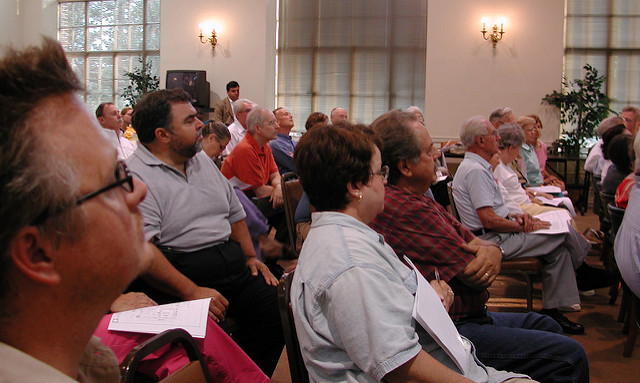 I used to live in a small town with a fairly depressed economy. Over the previous two decades, they’d lost the farm machinery plant, the appliance plant, and the industrial restaurant equipment plant. Good jobs were hard to come by, people were hurting, and most young people left town as soon as they turned eighteen.

When a new plant announced it was moving to town, you might have expected the local community to be overjoyed. After all, it was a chance at jobs and renewal, right? The factory even planned to move into one of sites abandoned by one of the defunct companies, so there’d be no real impact on the face of the community. However, if the new business expected to be greeted with cheers and parades, the owners were sorely mistaken. Instead, they got protests, angry town hall meetings, and skeptical letters to the editor from residents concerned about fair pay, creating local jobs, and community involvement. Was there any way for the new company to find a place in this mature community?

The Fundamentals of Stakeholder Engagement

When your company expands or moves into a new area, it’s important to plan for stakeholder engagement.  Stakeholder engagement is the process of identifying groups of people who may have concerns about your business and communicating with them to resolve their fears and objections.

It’s easy to fall into the trap of thinking that people will love you. After all, your business is creating jobs, paying taxes, and planning to become part of the community.  However, at the community level you may be perceived as an invader, a colonizer, or an exploiter, especially if the residents have had bad experiences with business in the past. To successfully become part of a community, you’ll need to build bridges and make connections with community stakeholders.

Depending on your project, these groups may include:

Each group will have different concerns about your project. You also need to tailor your communications and outreach to the needs of each stakeholder group.

The Case of the Suffering Stakeholders

After careful research and a series of town hall meetings, the leaders at the new factory discovered that the major concerns of the protesters were mostly related to the new jobs. First of all, residents worried that the company would choose not to hire locally, and instead bring in workers from another of the company’s locations just across the state line. This could change the local culture without providing a concrete benefit to current residents.

They also feared that if positions were offered to local residents, they would be menial jobs. They were afraid the jobs wouldn’t pay enough and would be too dangerous for the salary offered. The factory might be getting tax breaks from political leaders, but never add equivalent value to the community.

Finally, they had a fear of abandonment. They feared that the new factory, like the ones that had been located there in the past, would integrate into the community, only to abandon it later and leave everyone worse off than they were before it opened.  Perhaps the people in power even knew this would happen, but were allowing the factory to locate in town to advance their own political careers. The residents were transferring their anger at the companies who left onto the new business that was trying to come into the community.

To address these concerns, the new factory ownership had to reach out to members of the disaffected group. They needed a careful plan of verbal and nonverbal communication to persuade locals that their business cared about the community.

To win over the stakeholders involved in the protests, the company adopted a multipronged approach:

By the time the factory had its grand opening, most people in town knew someone who’d gotten a job there, had a kid who’d worn their logo on a sports jersey, or had seen their float in a parade. They had talked out their differences in town halls and were satisfied that the factory would have more positive effects than negative ones. The company’s effort paid off by integrating them into the very community that had initially rejected them.

A great stakeholder strategy requires understanding both your company and the community you plan to locate in. It requires a strong, engaged, compassionate leader who can see the situation from the point of residents. If you need help integrating into a new community, Applied Vision Works can enable you and your employees to become the kind of team that can successfully engage community stakeholders.