Three Companies that Used Adversity to Turn Business Around

From Micromanagers to Pushovers: How to Manage Four Styles of Toxic Leadership 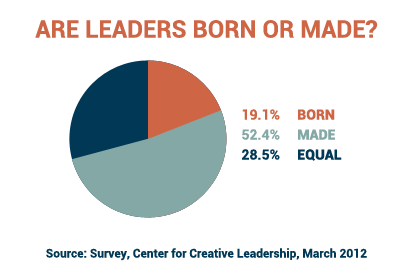 Leadership qualities are more than just qualities - they are skills that can be cultivated.

Leadership qualities are more than just qualities – they are skills that can be cultivated.

It oftentimes seems that the qualities of a leader – a visionary who makes bold decisions and guides others in accomplishing their goals – are factors of personality, something you’re either born with or not. But leadership qualities aren’t static traits. They’re more than just qualities, really: they’re skills. Skills can be cultivated, practiced, and nurtured. The best way to develop leadership skills is with hands on experience. Luckily, everyday life is filled with opportunities to work on your own leadership capabilities. You just need to learn to recognize and act on the opportunities presented to you.

When asked about how great leaders are built, most people can probably agree that all great leaders possess the five following key traits, which we’ll call the five D’s of leadership.

Building Trust is Part of Delegation

While delegating is a major part of management, only 30% of managers believe they know how to effectively delegate.[1. “How to Delegate More Effectively in Your Business,” http://www.forbes.com/sites/martinzwilling/2013/10/02/how-to-delegate-more-effectively-in-your-business/]

While you might pride yourself on your ability to do a great job, the people under you could view your lack of delegation as a statement that you feel they’re incompetent. Delegation is a major part of being a good leader.

Take advice from Richard Branson, the CEO and Founder of Virgin Group. Often cited as one of the most unusual, but successful, minds in business, Branson credits a huge amount of his success to learning to delegate early on, saying,

“When employees tell you about their good ideas for the business, don’t limit your response to asking questions, taking notes, and following up. If you can, ask those people to lead their projects and take responsibility for them. From those experiences, they will then have built the confidence to take on more and you can take a further step back.”[2. “Richard Branson on the Art of Delegation,” http://www.entrepreneur.com/article/219988]

How can you practice delegation when the only way to improve upon it is doing it? There are many opportunities every single day that you will run into that will give you a chance to put a smaller task in someone else’s hands.

For example, do you buy a morning cup of coffee? If you’re the kind of person who has trouble delegating, chances are you’re the kind of person who gives very explicit instructions for that cup of coffee. For once, try not doing that. Pick something right off the menu and trust the person behind the counter to get it right. Every time you successfully delegate and get what you want, try doing it with a bigger task. Raise the stakes with each effective delegation.

It’s a matter not of moving in leaps and bounds, but, instead, in small increments. As you see that you can get what you want without managing every small aspect, you’ll come to understand most people will perform when asked, whether they’re your local barista, or your second in command. Of course, when they don’t and you must deal with conflicts, then it’s time to practice diplomacy in conflict resolution.

Every leader has to handle difficult interpersonal situations. This can be challenging if you come from a technical or non-sales background where you don’t deal with people face-to-face regularly. However, diplomacy is a soft skill that every leader needs in order to thrive. One of the ways to master this skill is to focus on open-ended questions.

Open-ended questions allow employees to feel they are being heard, which is a very important part of diplomacy. Diplomatic people don’t order; they open a dialogue. When dealing with a workplace conflict, you need to give all parties an opportunity to explain themselves. As you’re dealing with the conflict, go over the questions you’re going to ask in your head. Make sure that you’re not phrasing them in a way that only requires a yes or no answer. Close-ended questions can become confrontational and are not appropriate when you’re trying to head a problem off at the start.

For example, something like, “Did you miss this deadline?” only allows the person who missed the deadline to answer in yes or no, without room for an explanation, immediately putting them on the defensive. Instead, acknowledge the problem, and leave room for an explanation. “I’ve noticed that the deadline was missed. What do you think was the cause of this and how can we prevent it from happening again?”

Changing the tone to open-ended dialogue allows people to feel less like you’re accusing them of something, and more like they’re collaborating to fix a problem. Of course, every now and then, diplomacy needs to lead to decisiveness in decision making.

Be a Decisive Leader

In some circles, decisiveness is one of the most important skills a leader can have.[3. “The Most Important Trait A Leader Can Have Is Decisiveness,” http://www.businessinsider.com/most-important-trait-a-leader-can-have-is-decisiveness-2013-6] With internet now as ubiquitous a utility as electricity and water, and smartphones in nearly everyone’s hands, we have an abundance of information at our fingertips and what we know today can change drastically by tomorrow. As a result, leaders might feel paralyzed by the overwhelming amount of information available. Learning to be decisive — to make a decision and stick with it —  is a necessary skill.

Take Ronald Reagan’s impassioned speech in 1987, regarding the Berlin Wall. Most people only remember his decisive statement “Mr. Gorbachev, tear down this wall.” However, a lot more went into it than that. The final decisive demand made at the end of that statement wasn’t seen as a demand to the crowd of 50,000 that listened that day. Instead, it was seen as a logical conclusion after Reagan stated all of the reasons why the wall should come down as a way of healing rifts and creating diplomacy. “Mr. Gorbachev, tear down this wall,” became an iconic statement.[4. “‘Tear Down This Wall’ How Top Advisers Opposed Reagan’s Challenge to Gorbachev—But Lost,” http://www.archives.gov/publications/prologue/2007/summer/berlin.html]

Most people don’t know that it nearly didn’t make it into the speech. Considering the hostility in the region, many of the presidential advisors at the time thought it was too controversial and too aggressive to state it like a demand. The speechwriter, Peter Robinson, had meeting after meeting over that very passage, arguing about why it was important to keep it just as it was. After meeting with many German citizens and hearing their opinions on the problems their country was dealing with, he knew it would become a rallying cry for those who opposed the wall. Robinson made a decisive – but informed – decision about that one phrase, and even as his advisors advised against it, so did President Reagan.

When it comes to decisive decision making, instead of weighing the pros and cons of every single detail, or seeking out more information, stop, and ask yourself this. “What’s the worst that could happen if I make the wrong decision?” Every time someone asks you a question that day, ask yourself “what’s the worst thing that could happen if I go with my first choice?” Even if the “tear down this wall” statement hadn’t gone over well, what’s the worst that could have happened? Would it have been completely unfixable? Robertson didn’t think so, and neither did Reagan. That made them willing to leave in the most pivotal part of the speech.

Taking a lesson from that, it’s easier to see that any decision you make on a given day, even if it’s completely wrong, usually will not be devastating and unfixable. Once you see that the stakes aren’t as high as you initially thought, you’ll be able to make solid decisions based on facts. When you make a fact-based decision, you’re able to stand behind it.

The other side of the coin of decisiveness is follow-through. A good leader must have the determination to see a project through from beginning to end, even if they don’t feel they’re getting the support they need to complete the project. That’s why you need to focus inwardly, by visualizing success rather than failure.

Take sports legend Michael Jordan as an example. Jordan wasn’t always a star basketball player. In fact, he didn’t even make the varsity team in his high school the first time he tried out. The coach put him on the junior varsity team instead.[5. “11 Things You Didn’t Know About Michael Jordan,” http://www.huffingtonpost.com/2014/10/26/michael-jordan-trivia_n_6035624.html] While that disappointment would have been enough to keep most teenagers from trying again, Jordan would not admit defeat. Instead, he made a point of visualizing the shot succeeding in his head before he ever took it, which boosted his confidence and made the shot seem possible.[6. “The Extraordinary Power of Visualizing Success,” http://www.entrepreneur.com/article/242373]

Visualizing success means creating manageable goals. Rather than concentrating on just the end result, concentrate on the next milestone that will help you reach that goal. Jordan didn’t concentrate on winning the game. He concentrated on making the shot, and those combined shots led him to win the game.

Take a page from his book. Perhaps there is a project in your own life that you’ve been putting off because it seems too big. Resolve yourself now to complete that project, and break it down into smaller, manageable bits. Each smaller goal you complete will strengthen your resolve to continue on.

While not all leaders are born risk takers, they will occasionally need to take calculated risks in order to improve. Not all risks will pan out, which is one of the first things that new leaders will need to accept. The key is learning from those failures and trying again.

The first step to developing your daring is knowing that if you don’t try, you’ll always fail. It’s a matter of risk/benefit analysis. If you don’t take the risk, you can’t reap the benefit.

One good way to develop your daring is to take up a new hobby with a high level of difficulty in an area in which you’re not naturally adept. If you can’t hold a tune, try the guitar. If all your drawings are stick figures, give oil painting a shot. The goal with this new hobby isn’t mastering the art. It’s about learning how to rebound from mistakes and try again.

Every day, and every interaction, whether it’s work related or not, can be an opportunity to develop your leadership skills. By being in a leadership mindset at all times, and focusing on your own five Ds’, you’ll be better prepared to build your career on a solid foundation. Developing leadership skills is a lifetime effort. At Applied Vision Works, we help leaders nurture their talents in order to become truly effective authority figures. Check out our Leader Development Program for more information.